An Alaskan journalist's perspective on local and national issues

The Future of “Occupy”

Well, it has been almost a year.  After laying low for the winter, the Occupy movement is back.  The protests have been going on anew for some time.  For those outside of this, with a modicum of political savvy, watching this happen, there have been a number of questions on their mind.

The first is – what happens now?  They’ve been out protesting.  This has made a lot of waves.  The financial industry still doesn’t take them seriously.  Believe it or not, there is an actually good reason, but we’ll get to that in a few.  These protests are well and good, but even those like this columnist, who is as far left as it gets are wondering – where does it go?

The reason that the big political movements of the 60’s and 70’s went nowhere is because it never got beyond people protesting and people talking.  People were in the street, and a lot of social upheaval was happening.  But the question came up there as well – what happens now?  Unfortunately for them, nothing did.  There was a chance for real major change across America.  The movement had a lot of people with a lot of ideas.  They just didn’t go with it.  My British Literature professor said that his generation screwed this one.  I have to agree with that.

So, one movement went nowhere, because they didn’t mobilize beyond being in the streets and making noise.  It is a year in to the Occupy movement, and there are still protests.  There is another one planned for July 22nd at Prospect Park.  These movements still get people’s attention, but that’s it.  This is why Wall Street doesn’t see them as a threat.  They get people’s attention while they happen.  The police brutally assault them because the cops are owned by the corporate masters who own this country.  That gets media coverage.  But once all is said and done, we are still there, still asking that same question.

The next thing is that we are wondering what can be done.  Wondering what will happen is one thing, but another important question is – what does this organization have the ability to do?  To answer both, the same thing needs to happen.

This group needs to mobilize.  The benefit of Occupy is that they are a group with a national presence.  What started as a bunch of people on Wall Street has now become a national force.  This helps answer the second question.  When you have something that is cross-country, you know that you have a lot going for you.  That is no small feat.  Some could argue that they actually have a global presence, since Occupy protests have been scheduled all over the globe.  They even go by that name.  But that may be being a little hopeful.  However, one cannot argue that they have a national presence.

They need to start a grass-roots movement.  They need to mobilize the public at large.  Get a public campaign going.  Get out to meet people.  Instead of having these giant rallies, have community events.  Reassure the public of who you are and what you are trying to do.  Answer any questions or critical thoughts that they might have.

One of the biggest problems, that I have seen, is that the public at large doesn’t know how to feel about these people.  On the one hand, they represent a point of view a LOT of people have.  They are tired of being treated like Wall Street’s dog.  They are tired of being the ones who pay for Corporate America’s mistakes.  They don’t want to have to live life constantly worrying about their medical bills, their mortgages, their college loans.  This is a group who represents a huge part of the population.  But the population at large doesn’t know that.  They aren’t aware.  They feel that these are just people screaming.

Occupy has to mobilize public support, and through that, they can put real pressure onto political America.  If they have enough of the public in their corner, and can make the politicians understand that if they don’t play ball, they don’t get elected, there is a chance for some real change for the better.

But if they don’t do something soon, they are just going to either fade away, or get consumed by the corporate structure of America, the same way that the Tea Party did.  Once upon a time, they did have a lot of pretty good ideas.  Now, they are the butt of a bad joke which starts with – An Alaskan, a Minnesotan and a Texan walk into a bar.

But that’s just my point of view.

There is something about a great piece of film that sends a message about all of society.  Finding out about the great parts of history through good film is something that people often overlook.  But it is a great thing to see.  Most of these films are often controversial, but that is one of the reasons that they are so important. 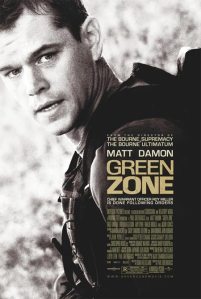 When the film Green Zone came out, a lot of people were screaming about how this film was anti-war, as if that was a bad thing.  The recent attitude that every piece of film about the war in Iraq must show America as the heroes is actually a little distrubing.  Since when has this country been above scrutiny?  Since when has America been so perfect?  The fact is that the lies that got this country into a war need to be talked about.

Part of what made that such an interesting movie was the fact that it was based on a true story.  All of the stories about weapons of mass destruction being in Iraq were lies.  Lies that our government let happen, because, well, the reasons for that will probably never be clear.  It is that way with a lot of our military actions.

Take the film Salvador, which tells the story of a photo journalist in El Salvador.  It is a depressing story about how America is helping dictators stay in power, even though the people tried to free themselves.  At the same time, it showed how easy it is for power over others to corrupt you.  The people tried to take control of their government, but the lies that they were Communists kept the military aid flowing.  It still does to this day.

Another point that Salvador made was the hatred of journalists by the military.  This is an absolute truism.  The fact is that our military and our government hates journalists.  The good ones, anyway.  The corporate media has never been something to fear, because they will never stand firm against the status quo.  Our government has always hated forces that can second-guess them, and show their lies.  Of course, thanks to the corporate media, there is no longer revolt against them.  This is one of the thing that has made the Occupy movement so very cool to observe.  These people are standing tall to fight oppression.  People in this country are oppressed, by a corporate and banking system that answers to nobody.  They are also oppressed by cops who don’t uphold their mandate to protect the people, and instead put them down.

Then there is the fact that politically poignant films tell us the stories about the groups of peole that we don’t want to think about.  Take a look at the film Blood Diamond.  It tells the story of the diamond trade in Africa, and how blood diamonds are driving countries that are hopelessly impoverished, and the people are brutalized by ruthless dictators that nobody seems to care about.  We can talk about spreading freedom all we like about Iraq and Afghanistan, but the fact is that people are being brutalized all over the world, and nobody cares here.  Nobody ever cares about the suffering other places.  We only care when we can blame them for attacking us.

Then there was the film that showed a culture for what it is.  It was called Lord of War.  The monologue toward the end by Nicholas Cage about how the law will fail, because this country is involved in dirt was a very harsh statement about the realities of the world we live in.  America is sending guns to scummy people, and all because we want to remain on good terms with them.

Really, the ultimate statement that is made in these politically-motivated film is that America likes to believe that we are the end of the line, that we tell other nations what’s what.  But the fact is that we don’t.  One of the greatest lines in cinema was delivered in Green Zone.

It is not up to you to decide what happens here.

That’s the truth right there.  America wants to believe that the rest of the world conforms to what we want, but that isn’t the truth.  And until people can wrap their tiny little minds around that very fundamental truth, this nation is going to be the biggest pot of lies, and nobody will care.