An Alaskan journalist's perspective on local and national issues

The Failing of Modern Cinema

There is a pattern that is emerging in film these days.  It is a rather tragic pattern, and doesn’t give enough respect for the people who have come before.  It is a pattern that honestly gets on one’s nerves, if they share the same views.  It seems to happen with a lot of great filmmakers these days, and it should be discussed more, because honestly, like every other element of culture, what one sees when they look back on cinema is important.  However, since this is all subjective, many may not agree, but the fact is that this does need to be discussed.  The great failing of modern cinema is that it doesn’t seem to take its audience very seriously.

Take a look at a lot of the movies that really bring in big bucks these days.  Anything by Michael Bay will do.  He is one of the great masters of believing that the cinema audience is nothing but a bunch of slack-jawed idiots who don’t care what is in a film, or what they are looking at.  But then you get the people like James Cameron, who has a really bad habit of making some very good films, like Terminator or Aliens, and then turning around and making over-the-top crap like Avatar.  There are films who tend to just believe that their audience is completely blind to everything but gorgeous effects.

To Bay and Cameron’s credit, both have created films that are visually gorgeous.  As much as I hated Transformers, and all the subsequent sequels, I will give that these films looked great.  The robots looked cool, and the battle scenes, if they could actually hold the camera steady for a second and not give the audience whiplash, were pretty awesome.  But, both Transformers and Avatar suffered from the same thing – not taking their audience seriously.

If the success of filmmakers like Chris Nolan and Pixar animation studios has shown us anything, it is that people can actually handle very complex characters and interesting plots along with visual stimulation.  Nolan remade a comic book character from the ruins that Joel Schumacher left it in after Tim Burton was ejected (for no good reason).  He made it into something almost exclusively for adults.  The Dark Knight was a film that only adults could truly enjoy.  Children would probably be terrified by the psychoticness of the Joker, and the violence was a little much for kids at a lot of points.

And a lot of people have made the arguments that, with kid’s movies, that they are for kids, so they shouldn’t be so serious.  This argument is a complete falsehood.  Pixar has been able to create intellectually engaging films for both kids and adults.  WALL-E had some great themes attached to it, like our over-indulgent culture, our dependence on machines, and our lack of accountability and our desire to take the easy way out instead of making the hard decisions.  And a lot of kid’s movies have done the same. 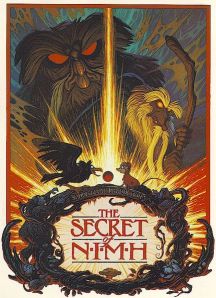 The Secret of NIMH was one of the most visually beautiful films that was ever made.  Everything Don Bluth did before 1990 was amazing.  After that, well, nobody knows what happened.  It also had an incredible storyline that is regarded by many fans of animated films to be one of the best.  This is another problem that a lot of great filmmakers have.  They start out wanting to take risks, to do their own thing, and after they start to make a lot of money, they become part of a culture of slackers who take the easy way out.  Don Bluth is the perfect example.  It was like he realized he had a lot of money, so he didn’t care what he created anymore.

Now, while Pixar was mentioned, it should be said that Disney has a back and forth problem of creating really arresting films, like one of the most perfect forms of visual poetry ever made, Fantasia, to their straight-to-video or dvd films, which won’t be mentioned here.

And the same thing happens with filmmakers for the older audiences as well.  Take a look at M. Night.  There are two M. Night Shyamalan’s.  There is the first who made The Sixth Sense and Unbreakable (probably one of the most underrated films ever made), and then there is the one who made Signs, and every other film that followed.  Here is a guy who seems to have just forgotten what people want to see.  One could argue that Steven Spielberg had the same thing happen to him.  After Jurassic Park, very little of what he did has consistently been good, although there are still some unsung heroes of his, like AI, which one could argue is one of the most thematically brilliant films that has been made in a long time.

The fact is that film creators have an obligation to the audiences to actually take what they do seriously.  Great film is becoming a harder and harder thing to come by.  The market is swamped with bad films now that straight-to-dvd films are becoming a huge market, although there is the occasional diamond in the rough in that market as well.  And it has been proven that audiences like to be emotionally engaged.  They like to be shown that we have enough respect to believe that they want to see a good movie.

The audience isn’t as stupid as Michael Bay believes them to be.  At least, let’s hope they’re not.

Eli’s Review: Too Big to Fail

There are certain films that are designed for an express purpose.  They want to convey a certain thought process, feeling, or reaction from the audience.  There are films like the abominations against rational thought, also known as the Twilight series, which were made for the sole purpose of making teen girls are warm for…one of the stalker guys’ forms, it could go either way.  Then there are films like The Social Network, where it wanted you to think about personal betrayal and the journey from being a nobody to having the world.  There are also films like The Sky Crawlers, which shows the rather cold world eternal warfare, and gets you to think about how pointless war is and how it inevitably doesn’t help anybody.

Good films actually require a person to think.  It is never enough, at least for this critic, to simply sit down and just start blankly at a screen and look at the pretty colors.  That was how Avatar got so many people to love it.  A story so cliche that it was beyond parody, and a vaguely racist character paradigm where the white man becomes better and being native than the natives.  But a truly great film is able to rise above that, to challenge a person’s way of thinking, and to even get them to think a little deeper about something that they hadn’t even had the courage to think about before.  It is a rare few films that truly go the distance in that category.

The film Too Big to Fail was an absolute masterpiece when it comes to getting the audience to think.  The fact that it is based on a true story make the point that it makes about society and the banking industry, and the politics of economics in this country that much more powerful and almost disturbing in parts.

A little background, this is a brand new film.  It was being shown at a meeting of the UAA College Democrats, of which I am a member.  It was shown at the home of John and Heather Aronno.  Two of the most politically active people that you will ever meet, if anybody in Anchorage has the chance.  Tonight was pretty fun, before and after the film.  But enough of the personal stuff, back to one of the most intriguing films that I have ever seen, and that is saying something.  Truthfully, it is the fact that this is based on a true story that is so powerful and so profoundly disturbing.  Truly, most Americans have no idea how close this country’s economy came to a complete meltdown.

I won’t lie, I am going to be laying out the plot of the film, but honestly, it is the delivery and the portrayal of the people who got this nation so close to disaster and then saved it that gives this film the genuine power that it has.  This film tells the story of the 2008 meltdown.  A rather interesting trick that this film uses is it combines the use of clips from actual news broadcasts with the story being played out.  The clips are used to drive home what part of the film they were talking about.  In a way, it was showing how the events that were unfolding were being shown to the people.  It almost seemed to be a mechanism to show how ignorant people in this country were of what was happening.

And the fact is that we truly were ignorant.  We have no idea how close we came to having our economy collapse.  There was a speech by Paul Giamatti’s character, Ben Bernanke, who was Chairman of the Federal Reserve, which was so powerful.  Pity I have been kind of exhausted all day, because I wish that I could remember it with clarity.  He spoke about how he had spent his entire academic time studying the Great Depression, and the writing was as clear as day to him that the country was in imminent trouble.  It couldn’t have been any better.

The fact is that every single person who was cast in this picture was brillianet.  William Hurt played Henry Paulson, the Secretary of the Treasury.  He was working with all of his might to stave off the potential disaster that was facing the country.  The efforts he was taking, and the level of committment were destroying him, on a physical as well as emotional level.  One can only imagine how stressful such a position would be in.  Plus, there was no clear solution, and everybody had their own agendas that they were playing at, which made his job even harder.  I could go through every role and how they are all perfect, but the fact is that that would take all night.  But there isn’t a single person who is miscast in this film.  It was made for HBO, but that doesn’t change the fact that it is absolutely awe-inspiring.

But the thing that truly sticks with you in this film is the fact that this kind of disaster could happen again.  The housing bubble, the very thing which caused the economic meltdown to happen in the first place (when it burst in late 2007) is back.  While it will take a lot of time to grow, the fact is that it is growing again.  Not only that, but China’s own bubble is on the verge of bursting, and that could spell a lot of trouble for this country, since we live in a global economy.  Plus, we still have the concept of Too Big to Fail in this country, which makes this even worse.  There were a series of textual epilogues that said that 10 banks now possess 77% of this entire country’s wealth.  Too Big to Fail is the understatement of the year.  We absolutely cannot afford to have these places fail on us now.  If that were to happen, I guess Bernanke and I are on the same page.  But, there seems to be no way to stop it now.

Until next time, a quote,

“I don’t get it, why are we debating this? If they go down, you all will.”  -Ben Bernanke, Too Big to Fail